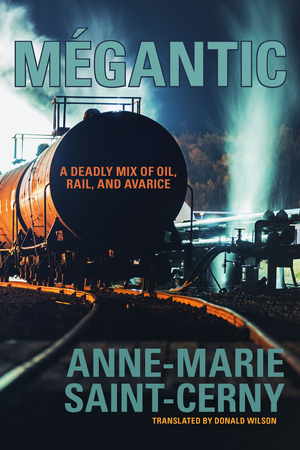 Lac-Mégantic, Québec, Canada – July 6, 2013. On a hot summer night, a driverless, out-of-control train descends the slope that leads to the scenic town below and explodes, pulverizing the downtown area and killing forty-seven unsuspecting victims. The devastation, which leaves the people of Lac-Mégantic dazed and in mourning, is quickly the object of a tortuous cover-up. Who are the tragedy’s real culprits?

In this fascinating piece of investigative journalism, which unfolds like a thriller, Saint-Cerny reveals the inner workings of the 2013 Lac-Mégantic rail disaster. She uncovers how the disaster, far from being just an "error of a faulty system," was caused by powerful people and institutions distant from the town itself. The tragedy of Lac-Mégantic began far before the train’s brakes failed; it was conceived in the offices of Wall Street hedge funders, of Dakota black-gold cowboy magnates, of oil conglomerates, of a political class entirely devoted to the interests of the rail industry. And when it struck, it hit a population which, while still in shock, found itself at the mercy of local predators.

The fruit of five years of work and interviews with nearly a hundred people, including victims and their relatives, Mégantic: A Tragedy in Waiting, tells the story of the disaster in three acts – before, during, and after – in an investigation whose ultimate goal is to prevent the preventable.